Everything We Know About Yu-Gi-Oh! MASTER DUEL 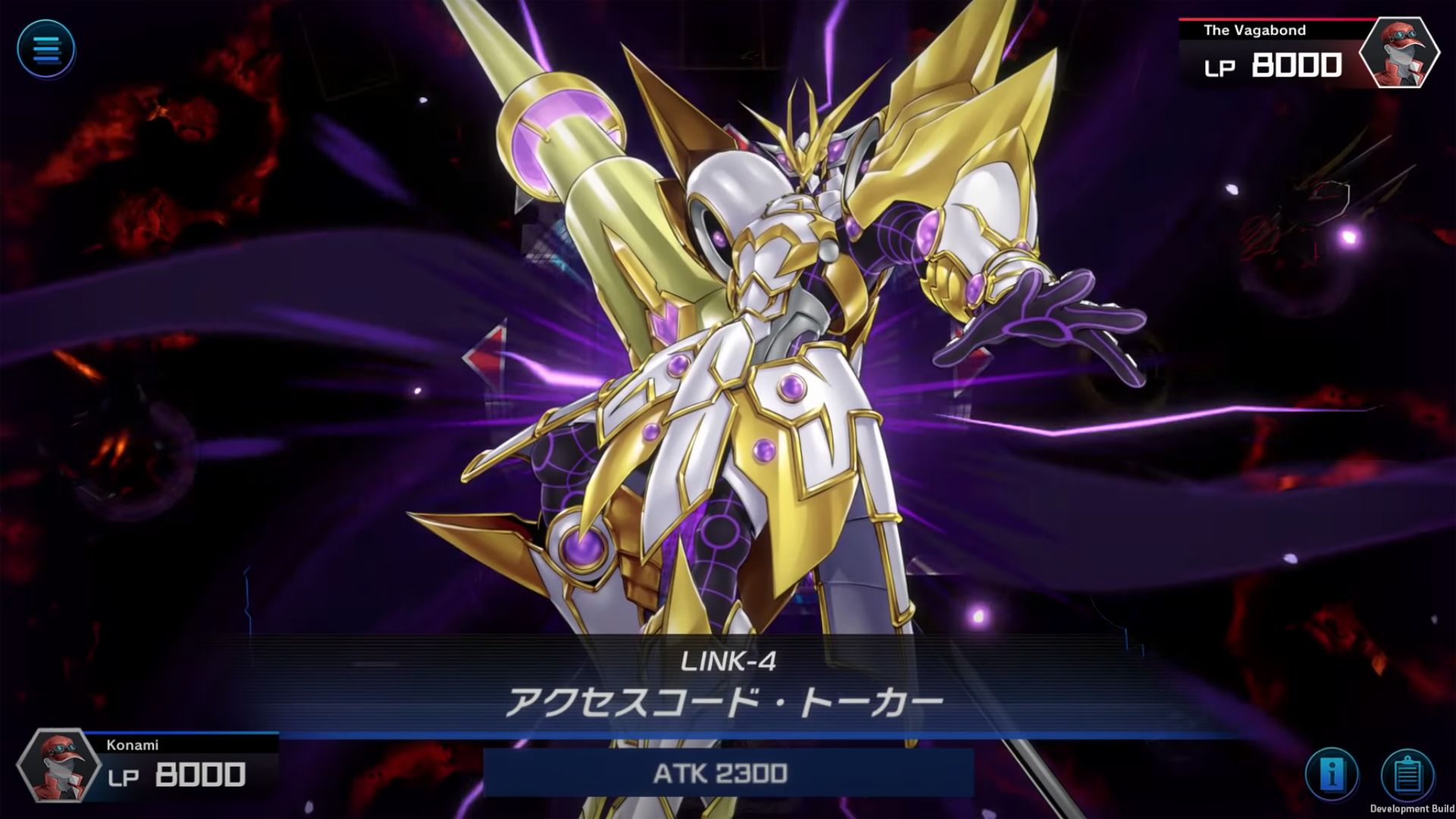 Yu-Gi-Oh! MASTER DUEL will be a Free to Download game, with paid microtransactions, rated T for Teen by the ESRB, which is currently scheduled to release worldwide on PlayStation 5, PlayStation 4, Xbox Series X|S, Xbox One, Nintendo Switch, Steam (PC), iOS and Android in Winter 2021 (December 2021 through March 2022).

It has been designed to allow players to “fully enjoy” the Yu-Gi-Oh OCG and TCG - with early trailers suggesting a split card pool for each version of the game due to differing product release schedules and Forbidden & Limited lists. The game is planned to have official tournament support for casual and competitive play, and play a part in future Yu-Gi-Oh! World Championship events.

As shown in the VJUMP magazine scan below, Yu-Gi-Oh! MASTER DUEL will support the official card database in various ways.

We can also see Magician's Salvation in the test hand - which becomes the most recently released card in the OCG, to be seen in MASTER DUEL, having released in late September 2021. 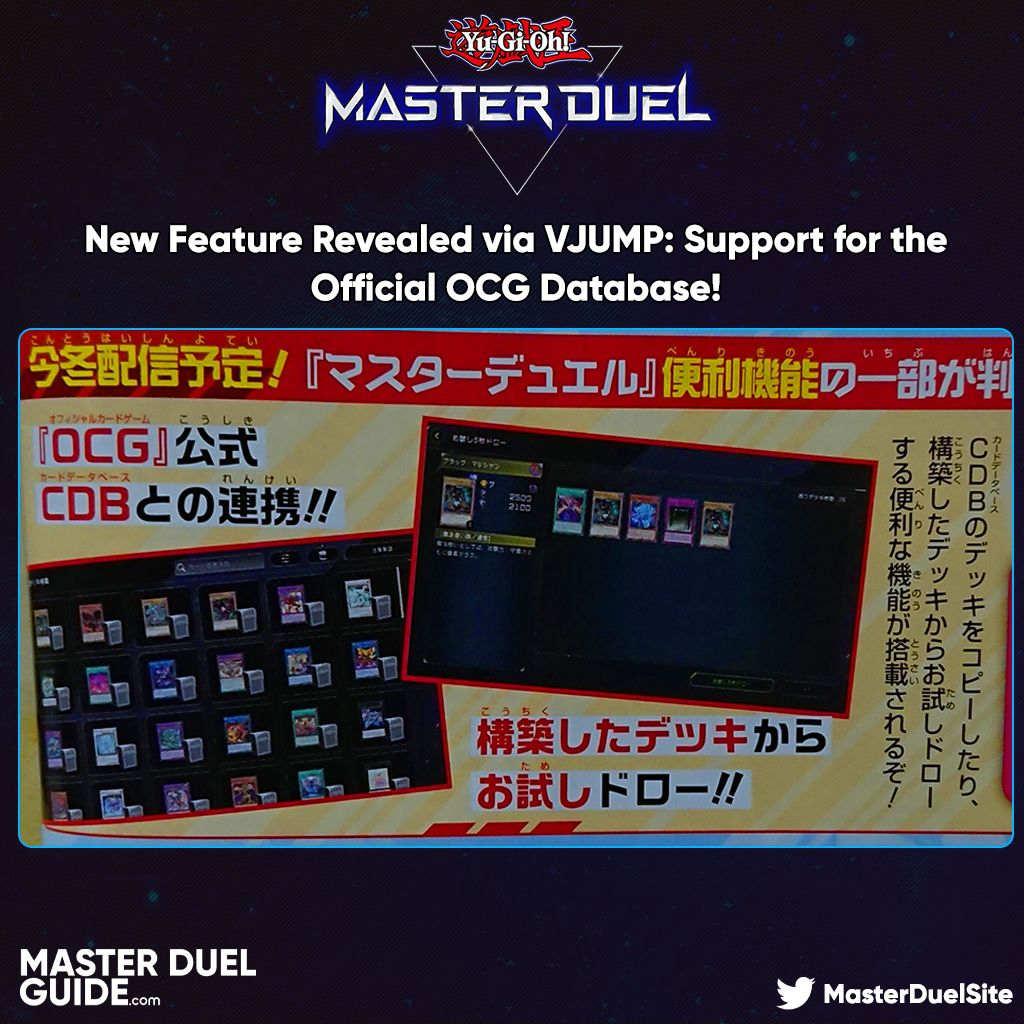 Over 10,000 cards will be available for players to "unlock" and collect, though some cards may be locked behind in-game purchases (Microtransactions) or require participation in events. However we don't yet know the scope of which this will affect gameplay.

The overall Card pool appears to go up to at least the Legendary Duelists: Synchro Storm set, which released back in May 2021 in Japan and October 2021 in TCG regions, thanks to cards such as Lyrilusc - Bird Call and Lyrilusc - Bird Sanctuary being spotted in Japanese gameplay footage from Tokyo Games Show.

Gems are the main form of in-game currency. You can obtain gems from various methods, for example as a First Time Completion Reward for Duels in Solo Mode, and can be used to buy Card Packs and Accessories from the Shop.

This is UNCONFIRMED, but from footage debuted at TGS, we can see 6 different resources each corresponding to one of Yu-Gi-Oh!'s main monster attributes. Could these be used for card crafting of some kind, or for something else? 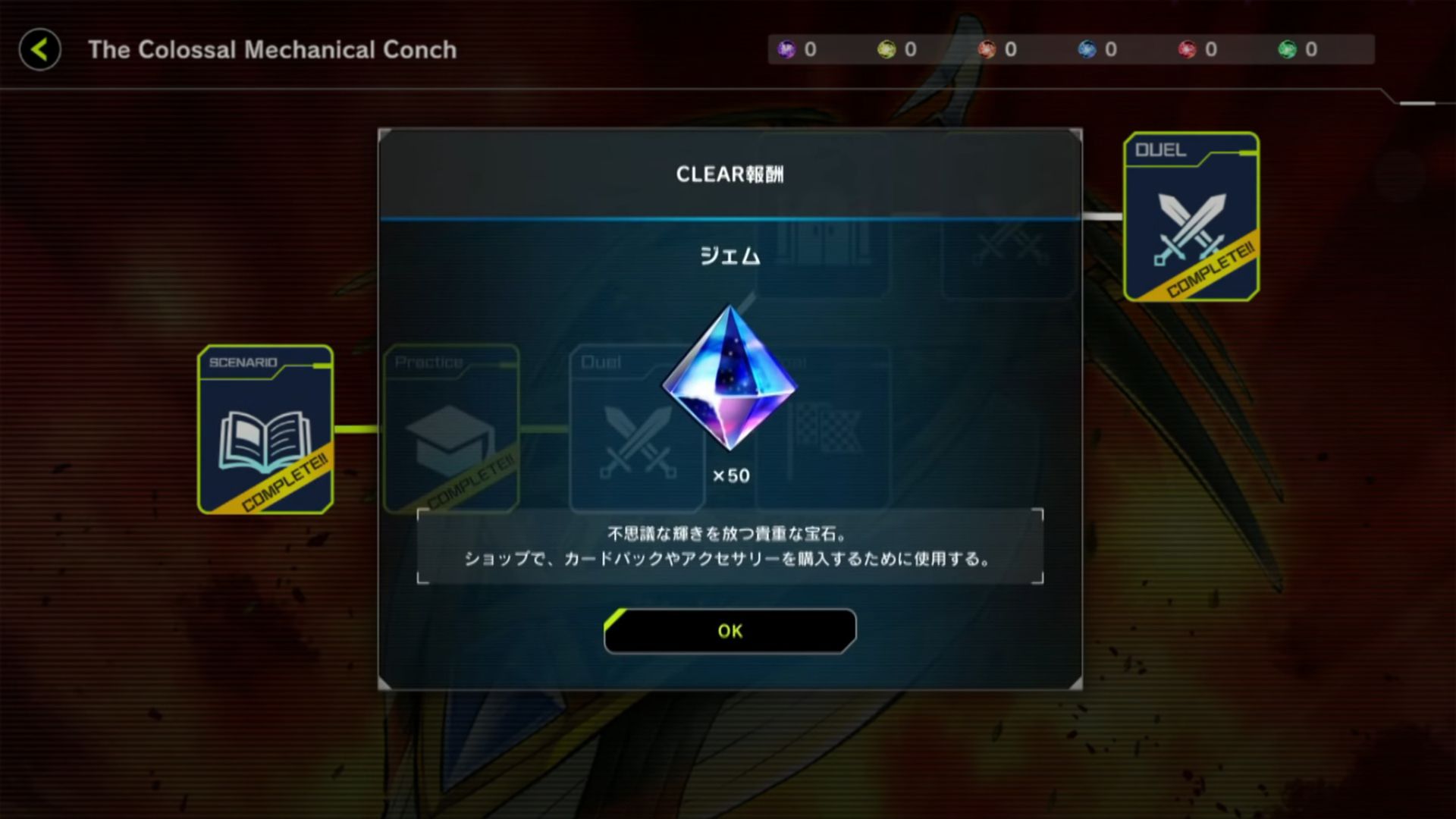 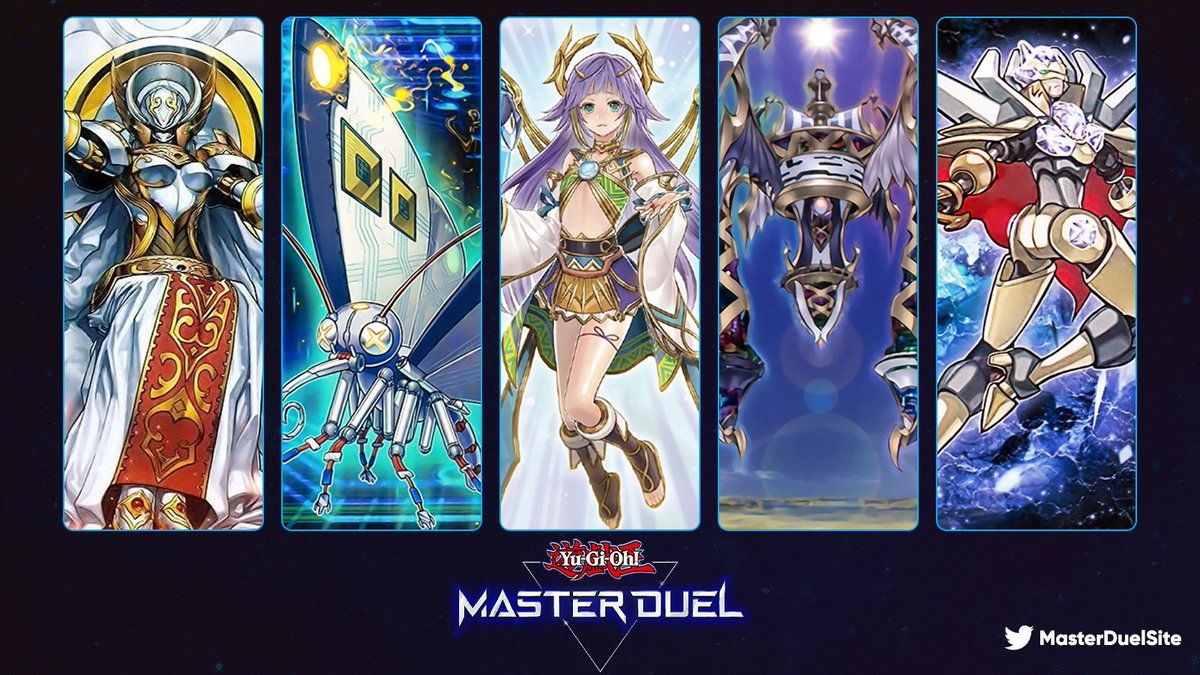 Solo mode is positioned as an enhanced tutorial of sorts, allowing players to get familiar with each of Yu-Gi-Oh!'s different summoning mechanics, whilst also giving previously unseen dives into the lore of certain card themes.

Five themes have been confirmed for Solo Mode so far: 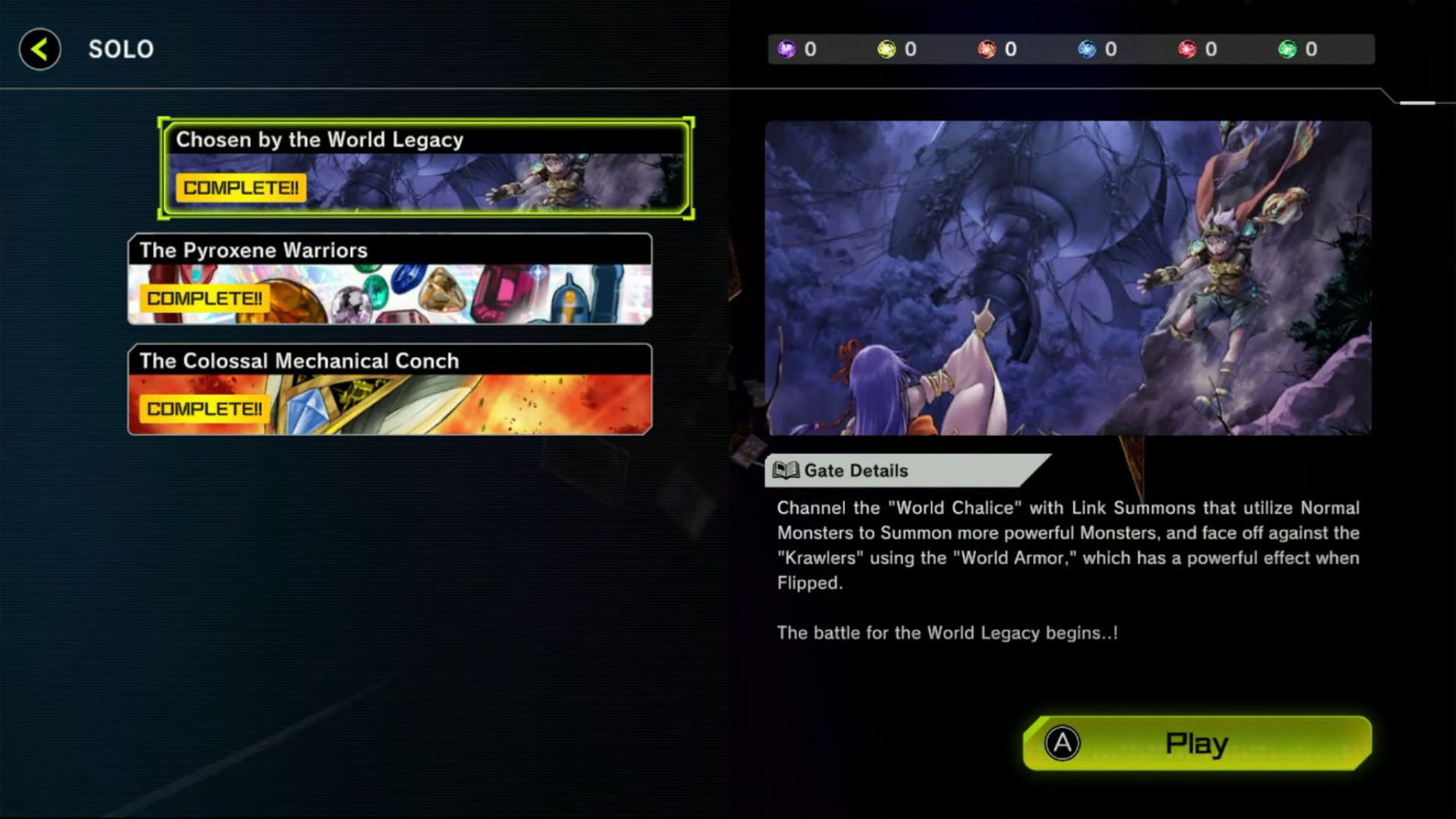 Each Solo Mode campaign consists of four types of events, spread out along a branching pathway. 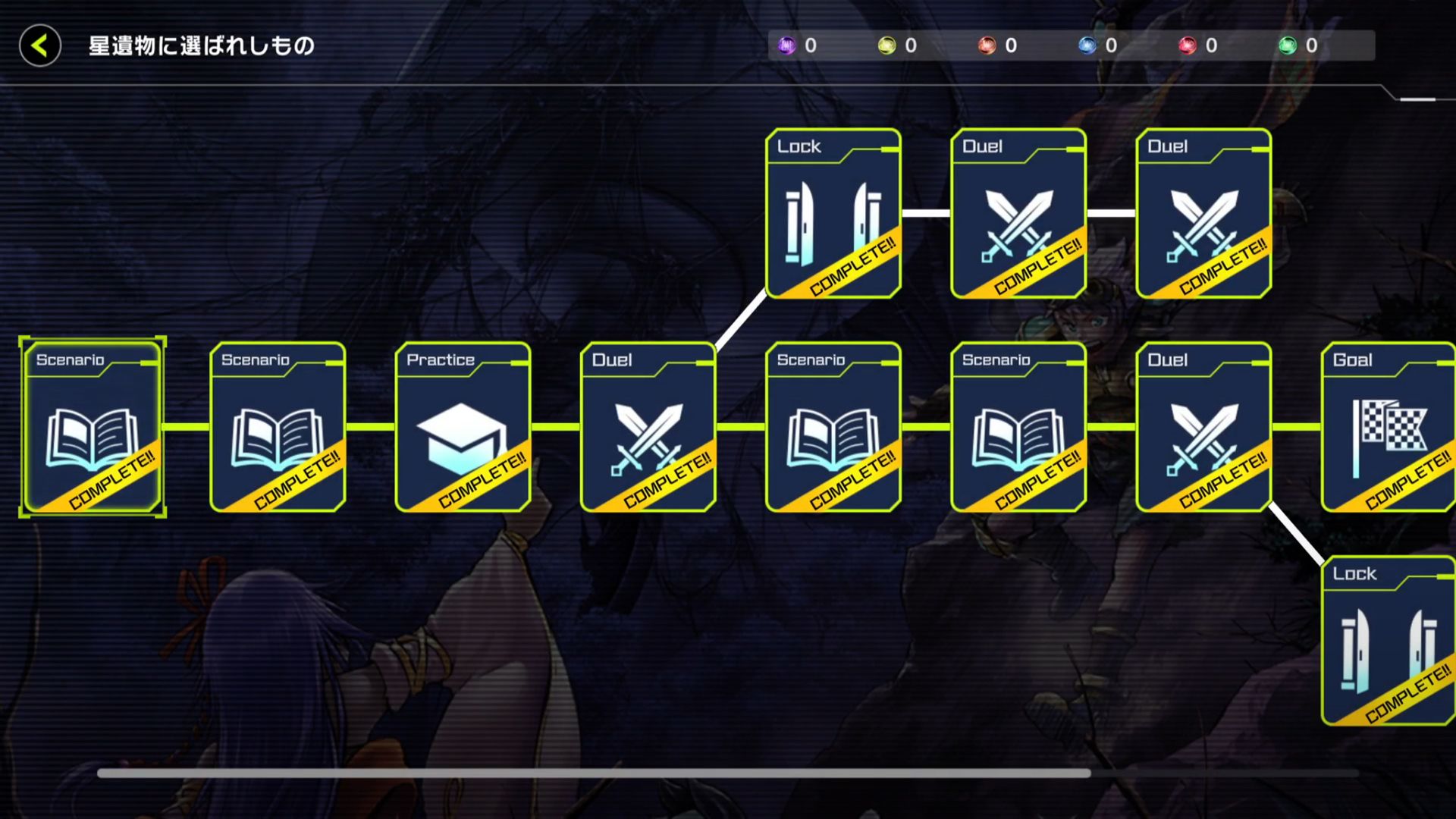 Some events and branches are locked until you have completed certain challenges or goals on the main pathway.

Before each duel you can view the Loaner Deck you will be tasked to play with, as well as your Opponent's deck. You will also find your first-clear reward(s) here too (50 Gems per event of the campaign in preview footage). You also have the option of choosing to go First, Second or let the CPU choose randomly for you. 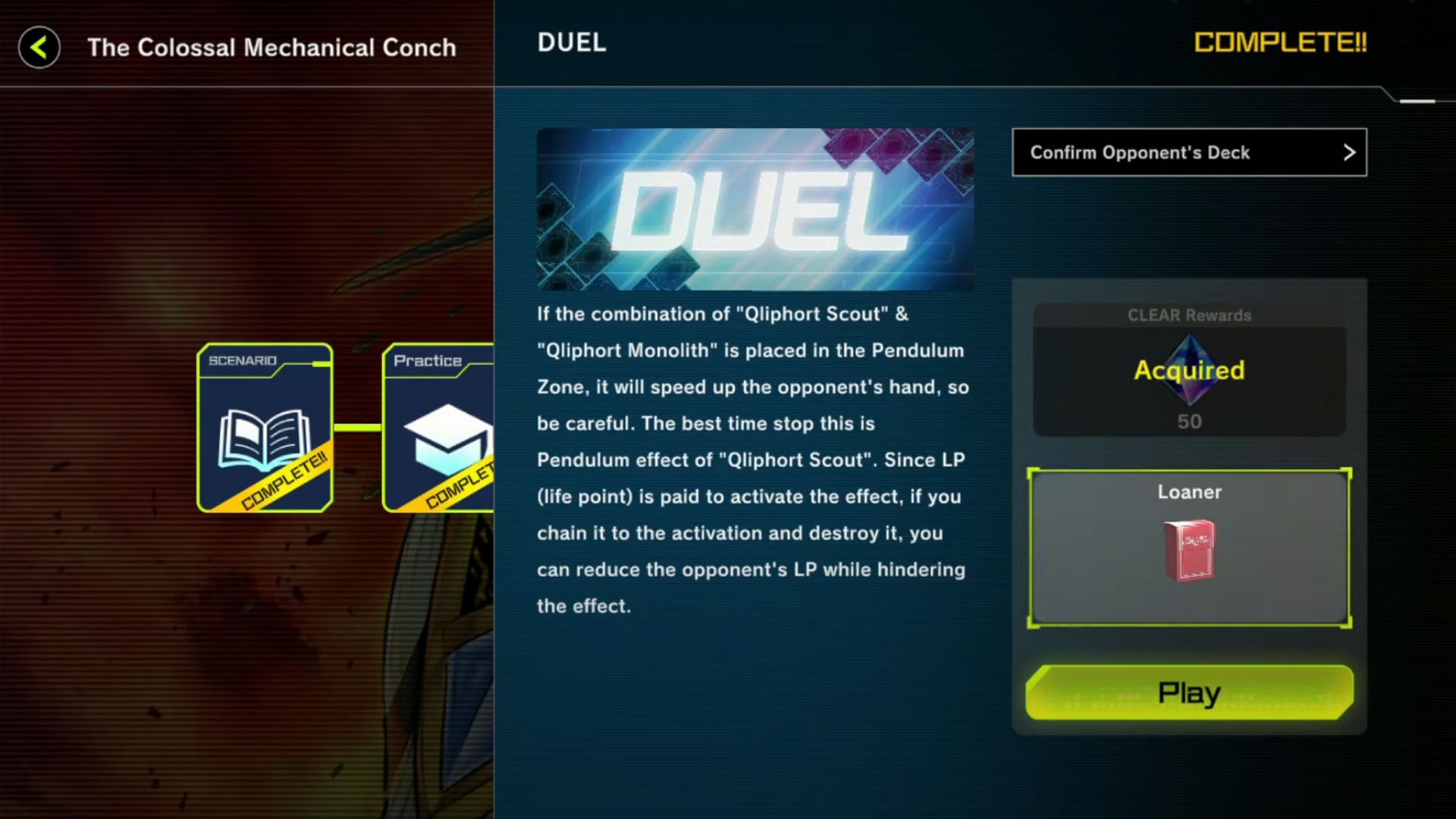 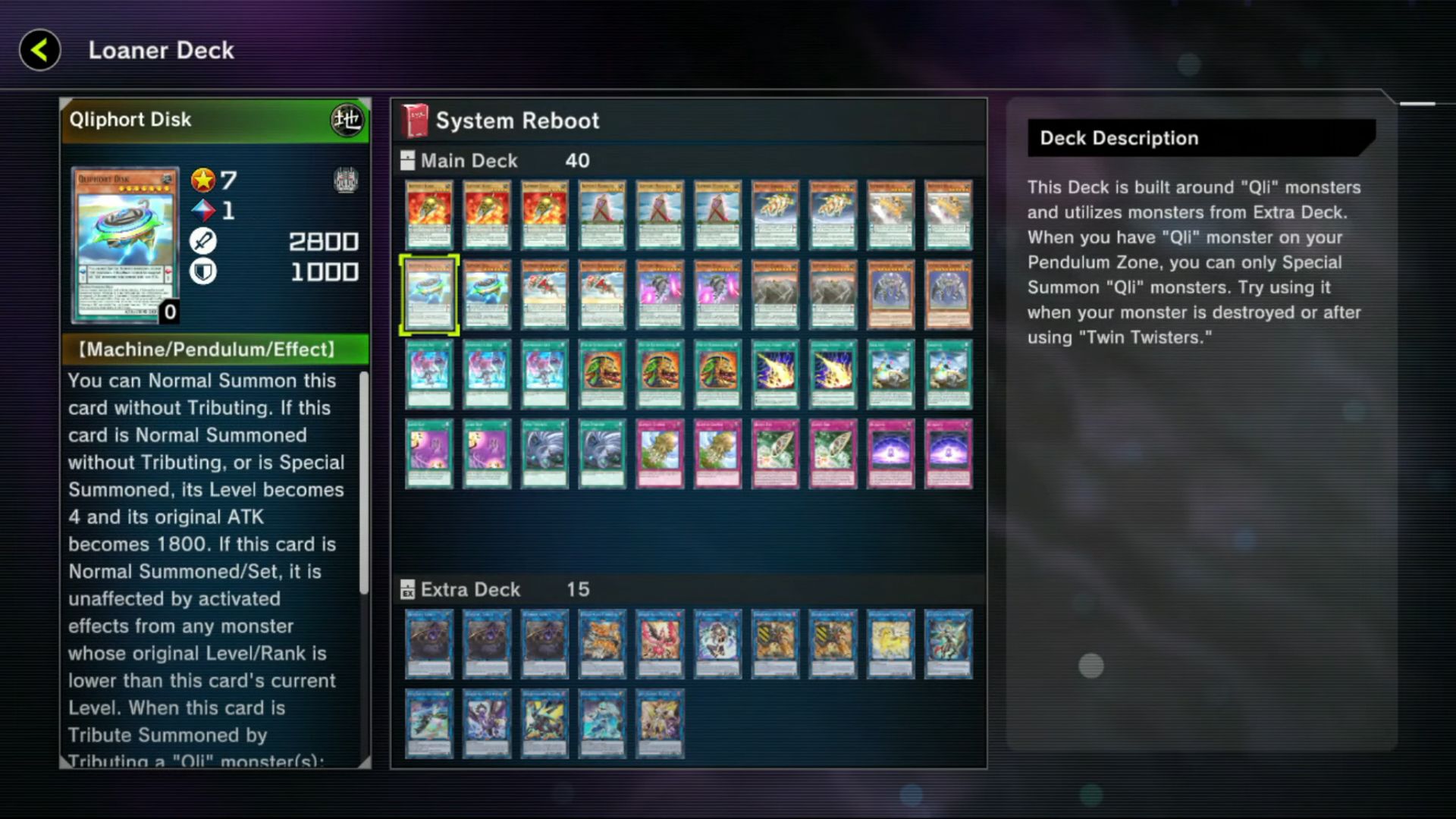 Yu-Gi-Oh! MASTER DUEL appears to have a shared progression system across both PVP and Solo Mode

Winning and losing a duel in Solo Mode will give you differing amounts of EXP, which will eventually level up your profile.

The MAX Level cap seen in TGS Gameplay previews is 50, though this cap may only be for demo purposes. Increasing Levels will likely give some form of reward, but none have been shown so far, even though we have seen Account Level Ups occur. 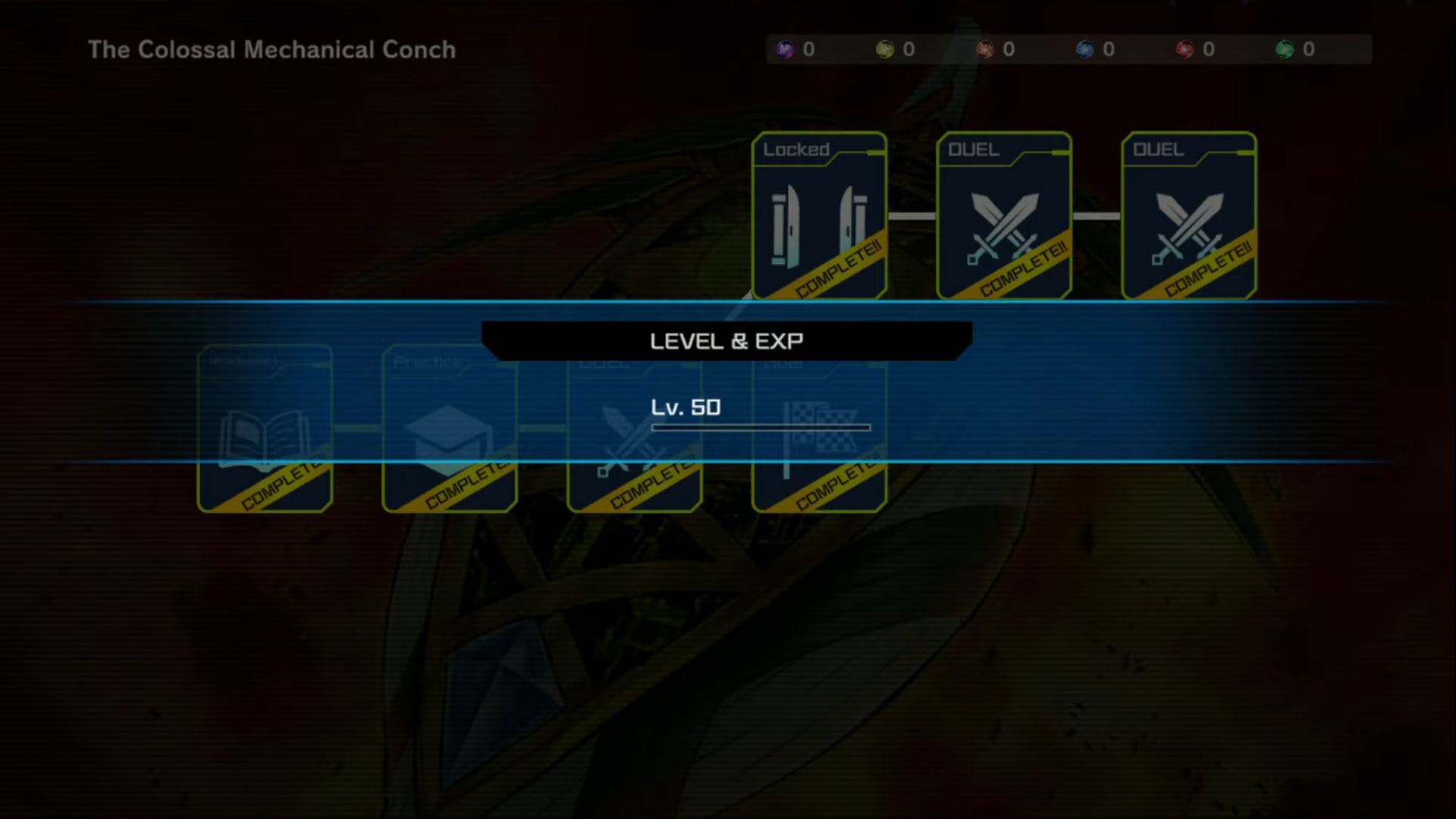 Cards in hand and on the field which have an effect that can be activated are outlined in an orange glow, Monsters that can be summoned have a light blue outline and cards that can be Set face-down have a dark blue outline. Cards which cannot be played under the current board state have no outline. Player priority is shown during either players turn by the colour of the respective players' duel field lighting up either blue for yourself, or red for your opponent.

Hovering over zones for the GY, Banished or Extra Deck will show the number of cards on top of the zone, as well as a pop-in window will appear on the right allowing you to see all cards in that zone. If cards are in the GY, the zone will emit a blue light and if cards are Banished, a purple light will be shown. 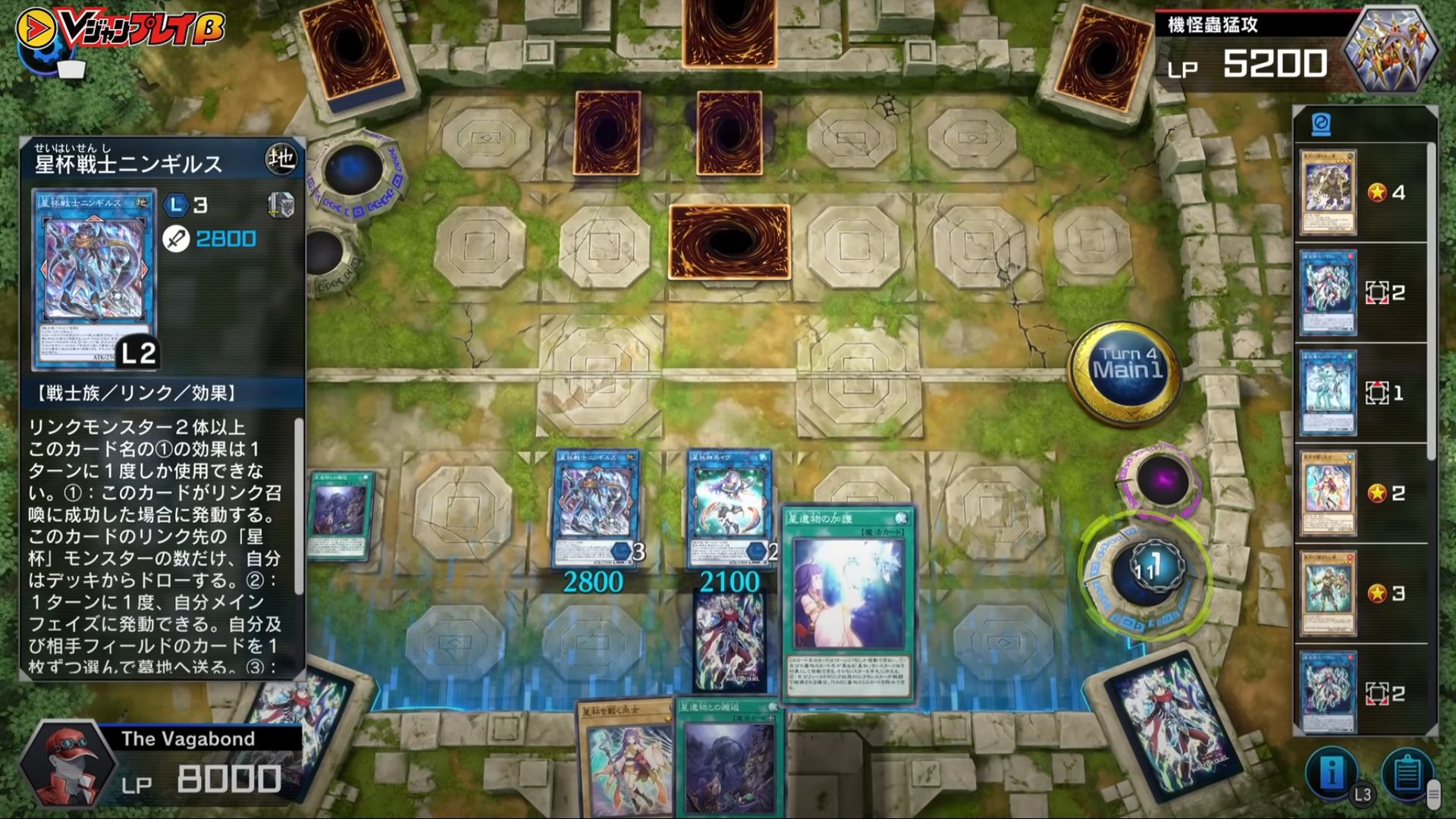 Console players will have button shortcuts to bring up relevant information. For example on the Nintendo Switch version of the game, ZL brings up a full screen view of the currently selected card, Y allows you to change your current phase, and ZR brings up your extra deck. The X button is used to minimize active windows to allow you to see the field and interact with area's of public knowledge. You can also cancel plays, such as setting a card in the Pendulum Scale with the B button - something you couldn't do on Yu-Gi-Oh! Legacy of the Duelist: Link Evolution. 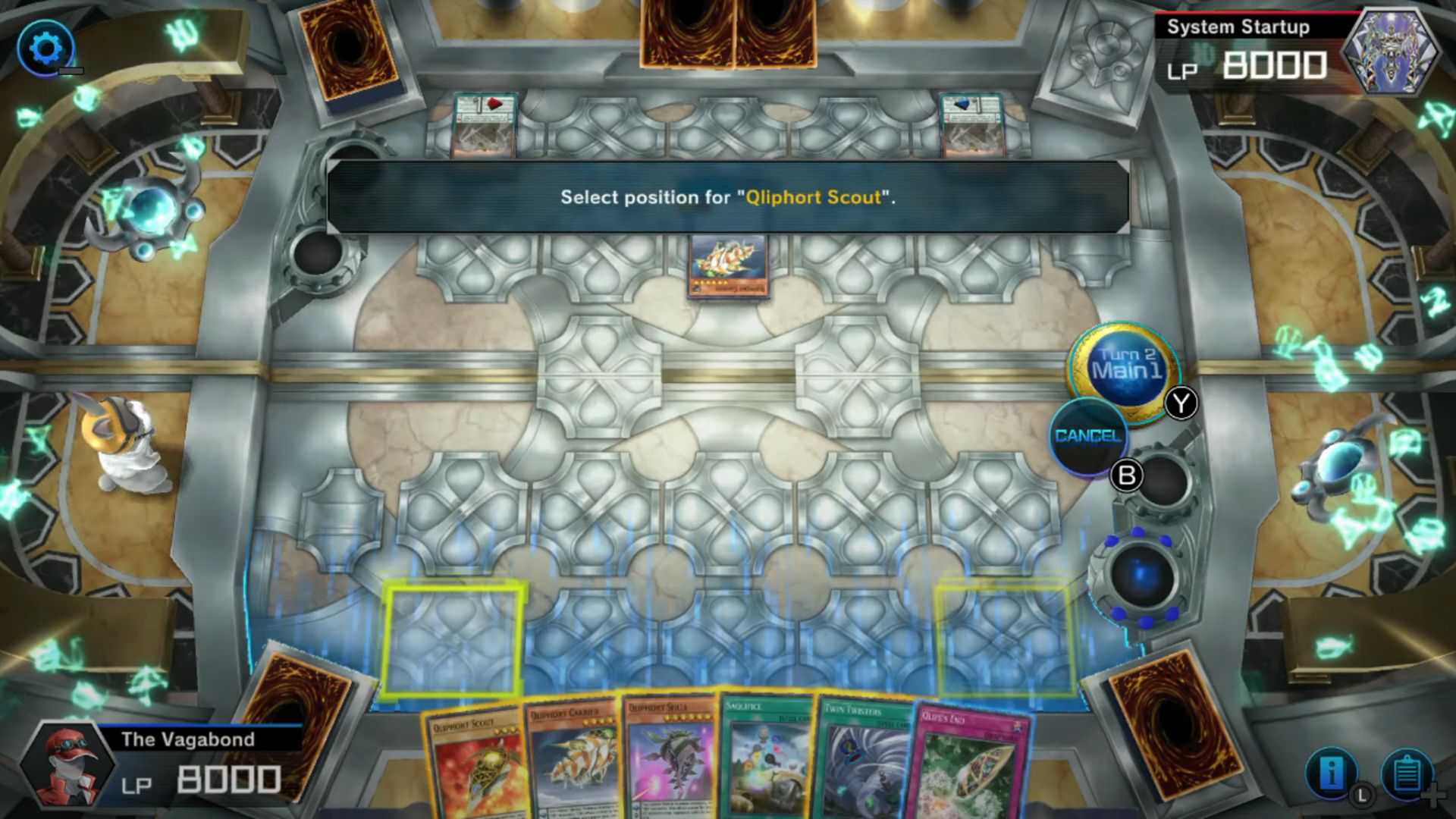 As a player takes life point damage, their duel field and surrounding environment will start to crack and break down.

Upon dealing the "final blow" a special animation will play as well as the losing player's duel field crumbling to pieces.

Chain links alternate sides of the screen depending on the players cards involved in the chain. Yourself on the left side of the screen, your opponent on the right. If multiple effects trigger at the same time to form a chain link, these will be shown clumped together on that respective players side of the field.

Card effects that are negated by another card effect are turned grayscale for a short period of time during the resolution of the chain. Cards that apply a Continuous/Lingering effect have a dedicated pop-up that appears in the top right of the screen, for example the effect of Maxx "C" to Draw 1 card per Special Summon or when a monster used as an Xyz Material gives an effect the monster it was used for - but this has only been seen in Spectator Mode gameplay thus far.

Cards with multiple choice effects, for example flipping a coin or rolling a dice, will confirm the activated effect in a similar pop-up in the top right of the screen. For example, the heads/tails board wipe effect of Time Wizard. 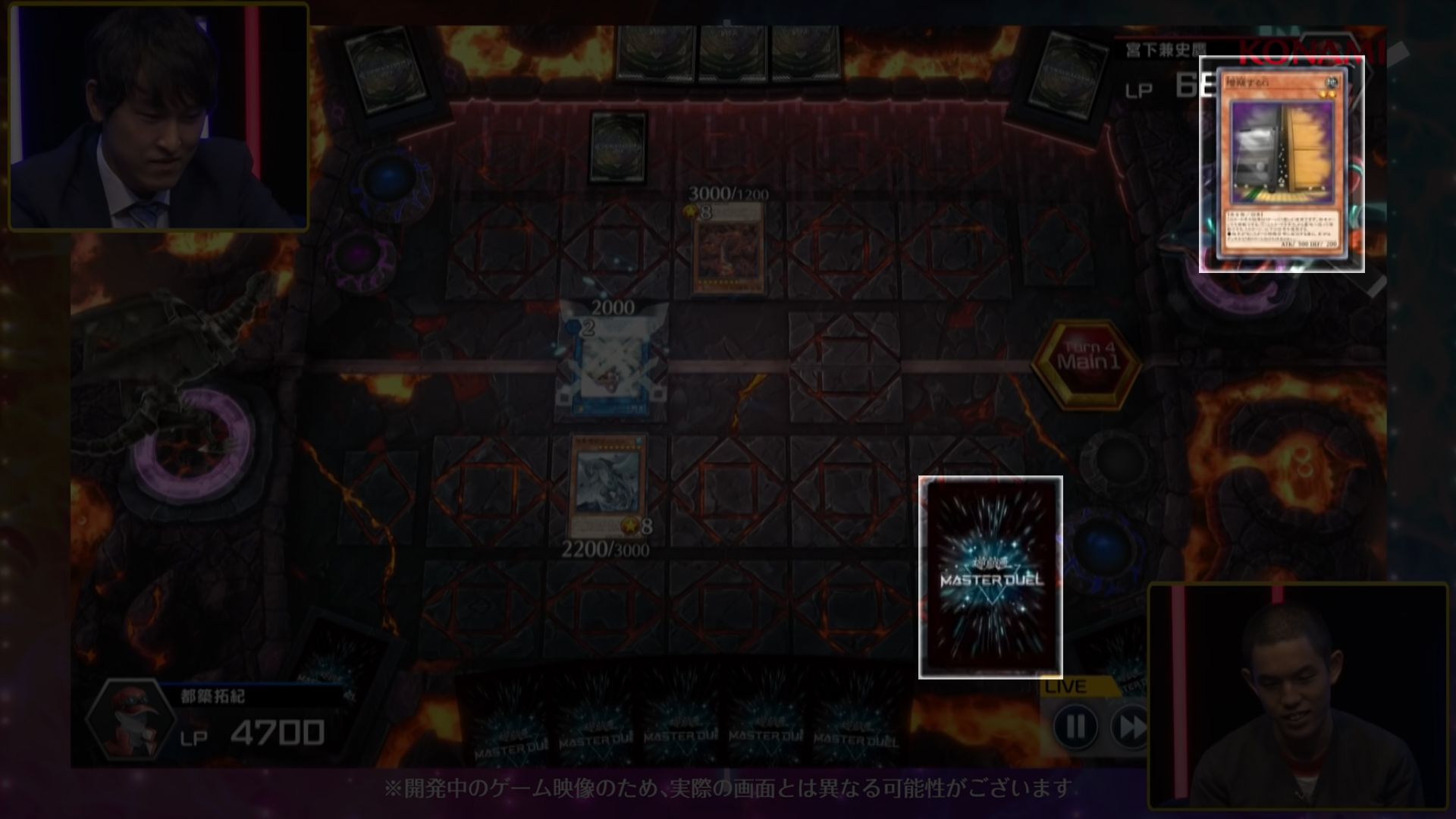 There is some form of Spectator System, which can be seen above, allowing you to watch a duel as it's happening live.

You can Pause and seemingly fast-forward through a duel, implying the existence of a duel replay system similar to Duel Links. 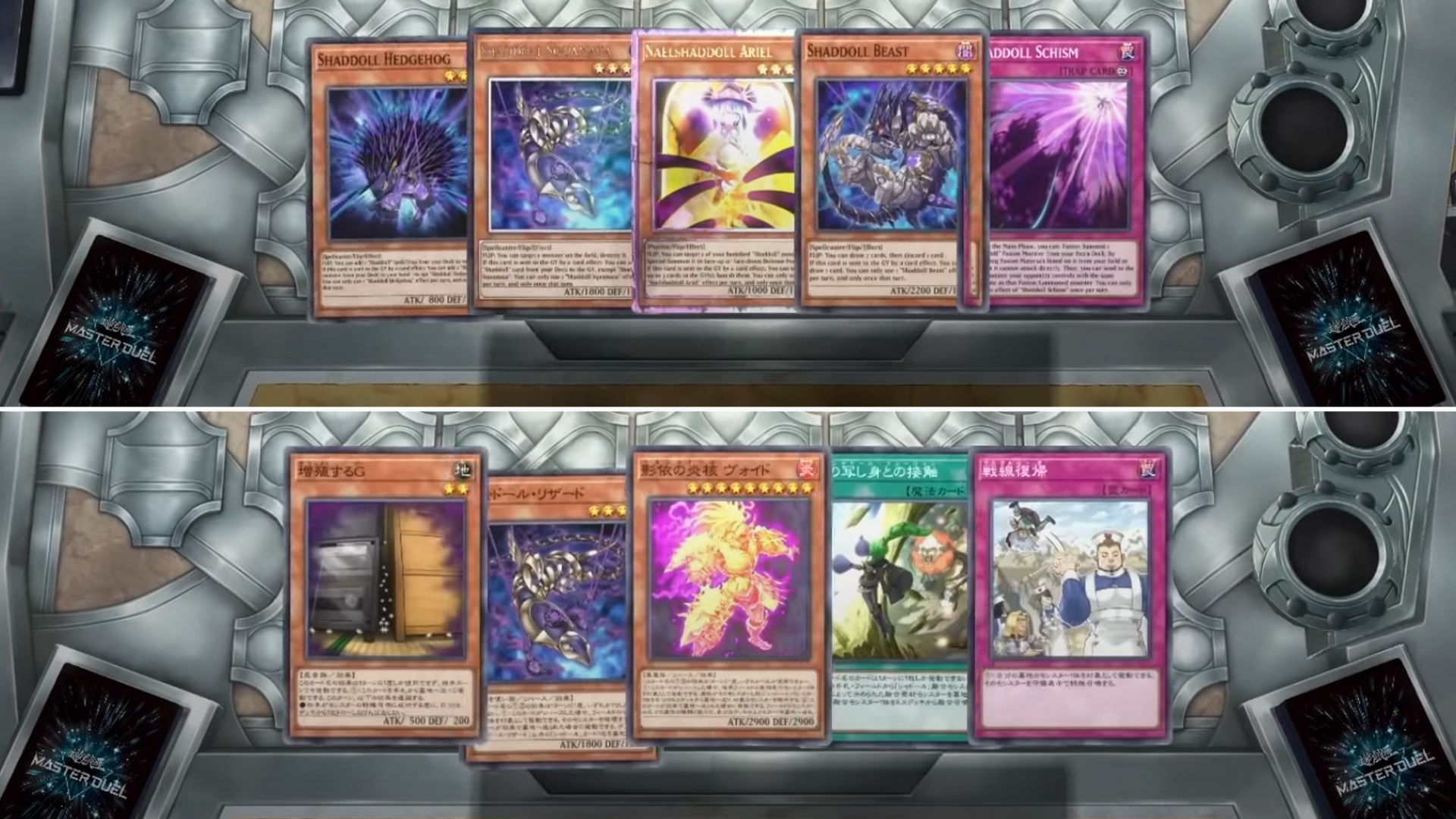 Yu-Gi-Oh! MASTER DUEL will support both TCG and OCG formats, however we don't know how these will be handled - Japanese trailers for the game have included Forbidden-in-the-TCG cards such as Maxx "C" and Chicken Game, which TCG trailers have omitted.

However the Gamescom EU trailer showed Chicken Game being played in an Exodia deck, which is Forbidden in TCG, however Konami Japan released this same footage in Japanese later that day, suggesting that the trailer footage was taken via the Spectator Mode of a Japanese duel replay.

The game is also highly unlikely to use a "Worlds Banlist" where the most harsh hit between each region is used like Legacy of the Duelist: Link Evolution, since if this was the case then both Chicken Game and Maxx "C" likely wouldn't be featured in official trailers due to being forbidden. 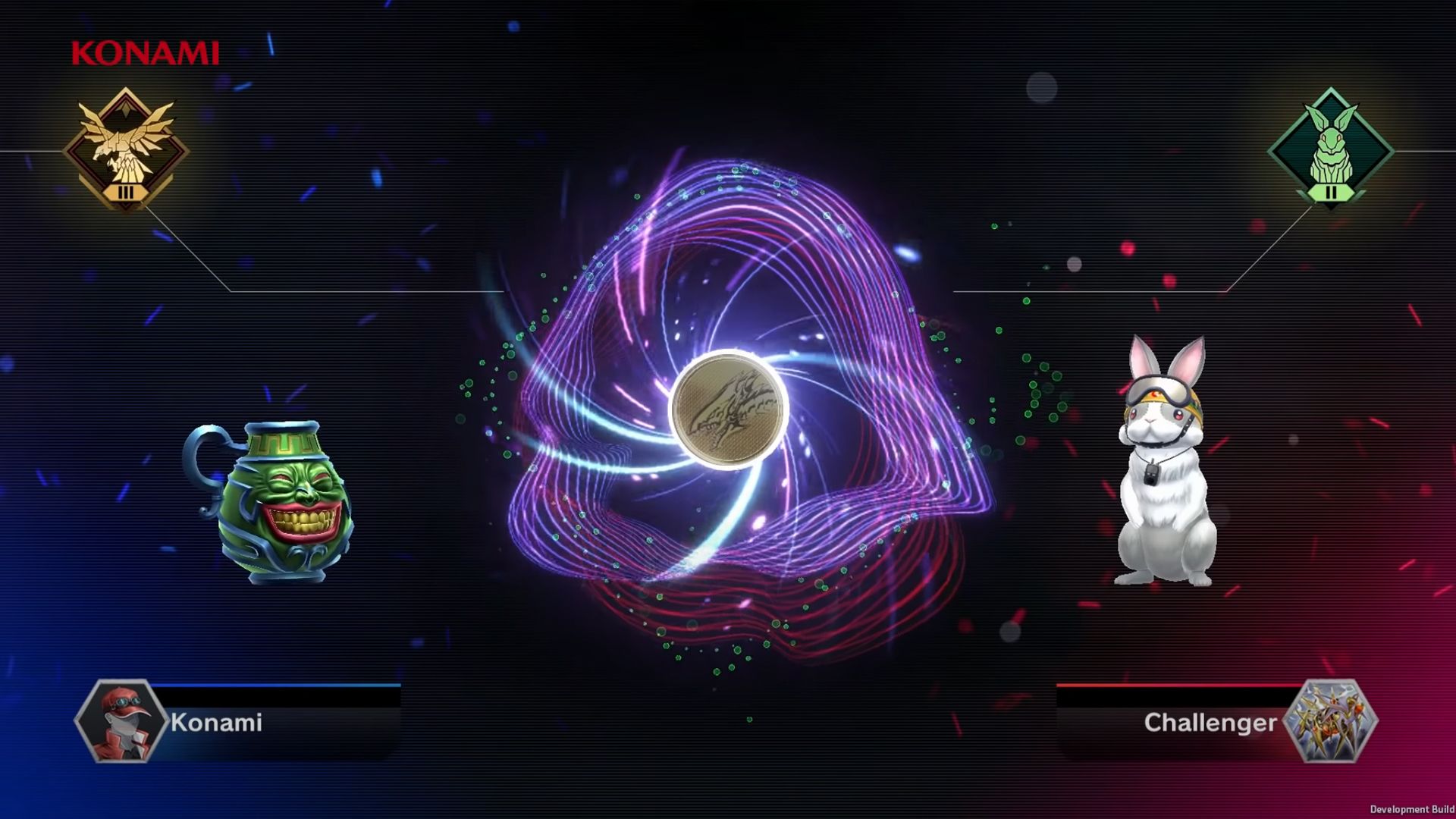 The Toggle Button from DUEL LINKS also appears to be returning, and is optional much like DUEL LINKS' implementation

A coin flip used to determine the starting player in Online Duels, which features Blue-Eyes Alternative White Dragon on one side. 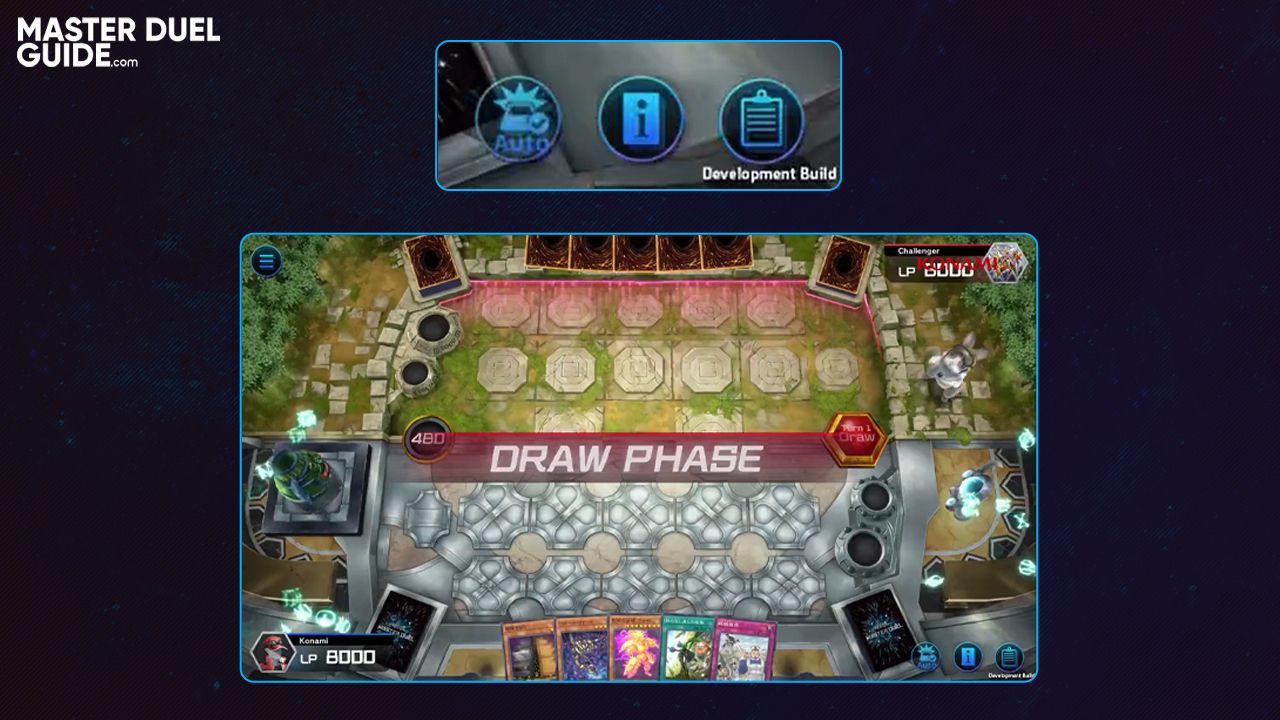 Will be purchasable from the Shop using Gems and IRL Currency.

7 Duel Field designs have been shown off so far. Three of which are very clearly based off existing card artworks of Spellbook Library of the Heliosphere, Preparation of Rites and World Legacy Scars. The others appear to be more generic environments, though some like the Steampunk/Ancient Gear-inspired environment may be harder to spot references. The selection of Card sleeves shown so far fall into one of two categories; Existing OCG-exclusive sleeves and card artworks.

In the case of the OCG sleeves, the Yu-Gi-Oh! OCG logo has been replaced with the MASTER DUEL logo. Card artwork sleeves have the Master Duel logo in the bottom right- as seen in Blue-Eyes Chaos MAX Dragon, Trishula, Dragon of the Ice Barrier and Auram the World Chalice Blademaster sleeves. 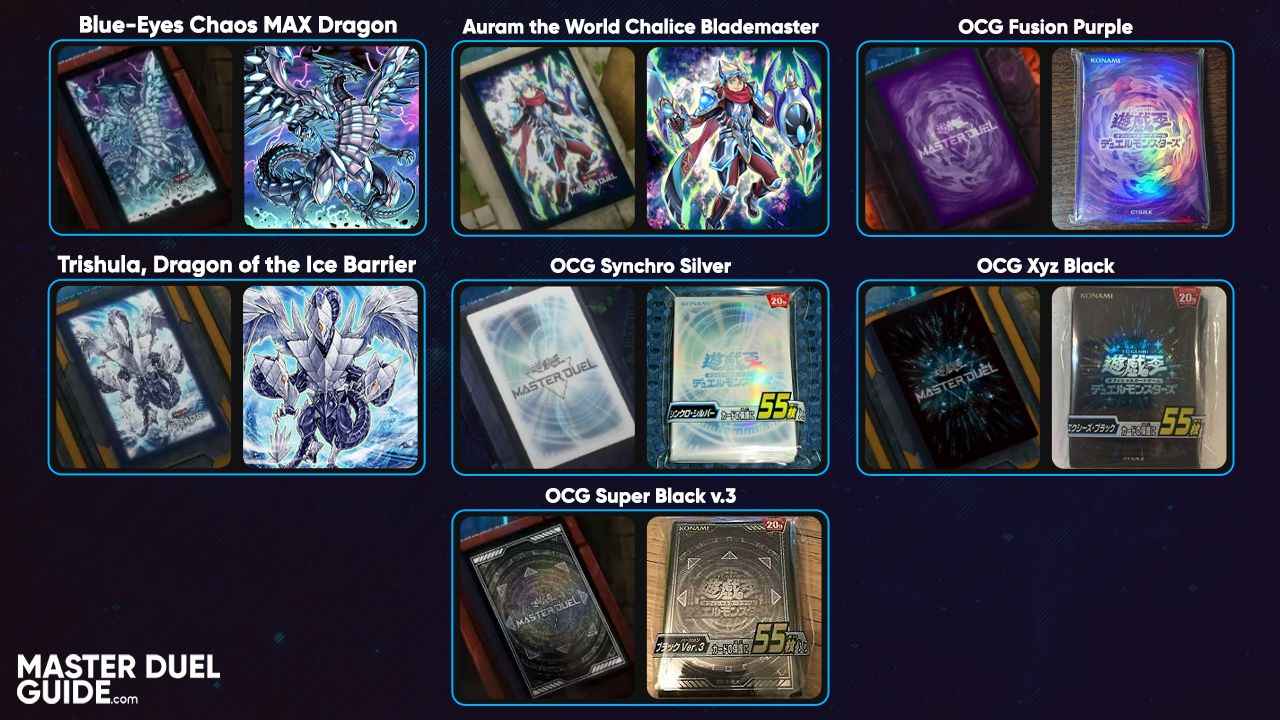 Player Icons shown so far include monsters such as X-Krawler Synaphysis and Gladiator Beast Domitianus as well as the Vagabond.

Card Rarities will also be changeable, but how cards with these rarities will be obtained is unconfirmed.

From the first reveal English trailer, we can see two different cosmetic rarity upgrades that look MUCH better than the cosmetic upgrades available in Duel Links. 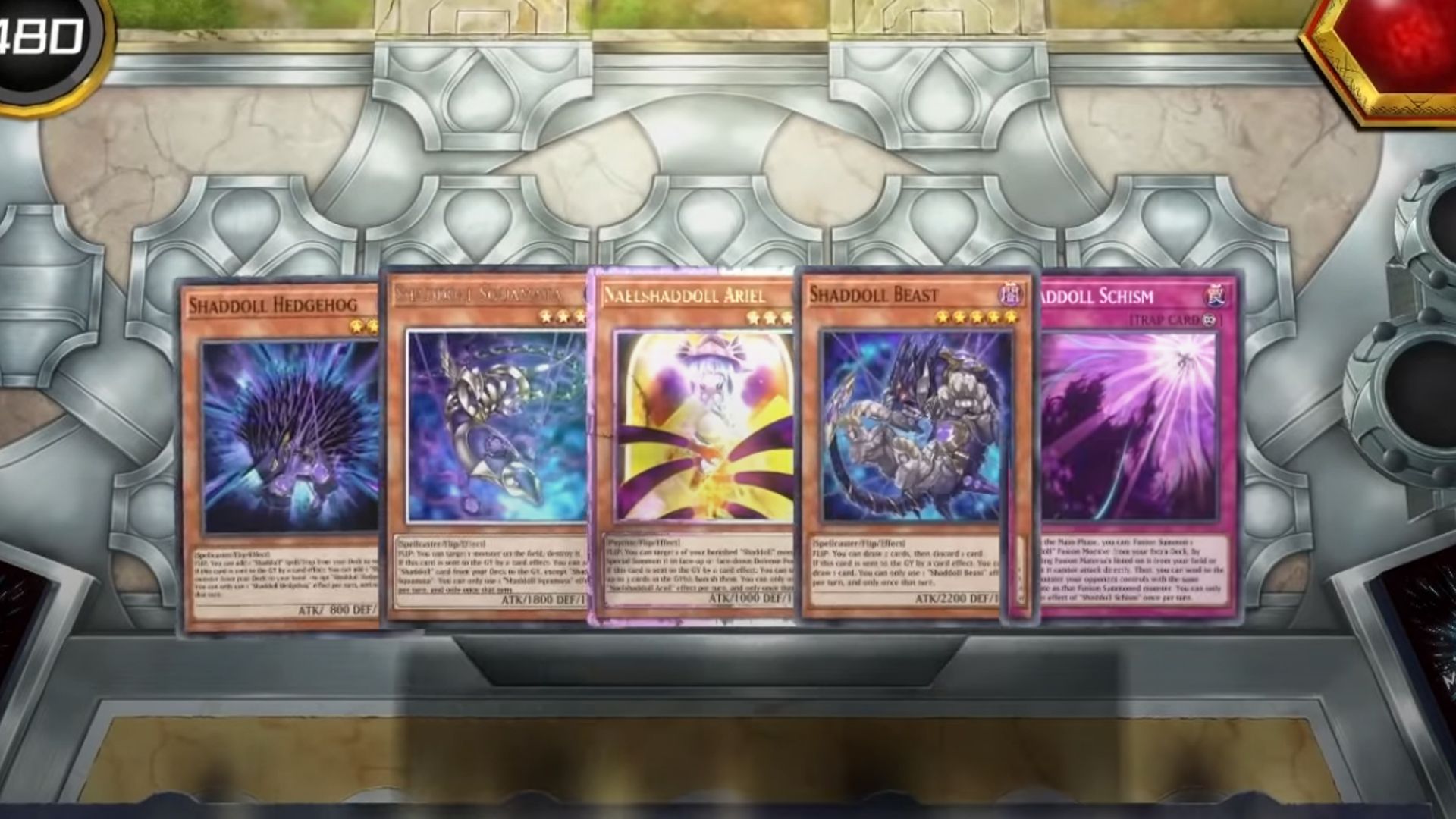 Iconic monsters from the anime and TCG/OCG will be available as avatars that sit beside you on the duel field. Each Pet has it's own idle animation, as well as unique animations for when you make a good move, are attacked and win/lose the duel. Most notably is Rescue Rabbit, who appears to Dab after you win the duel.

So far 12 Pets have been spotted so far in officially released MASTER DUEL media. 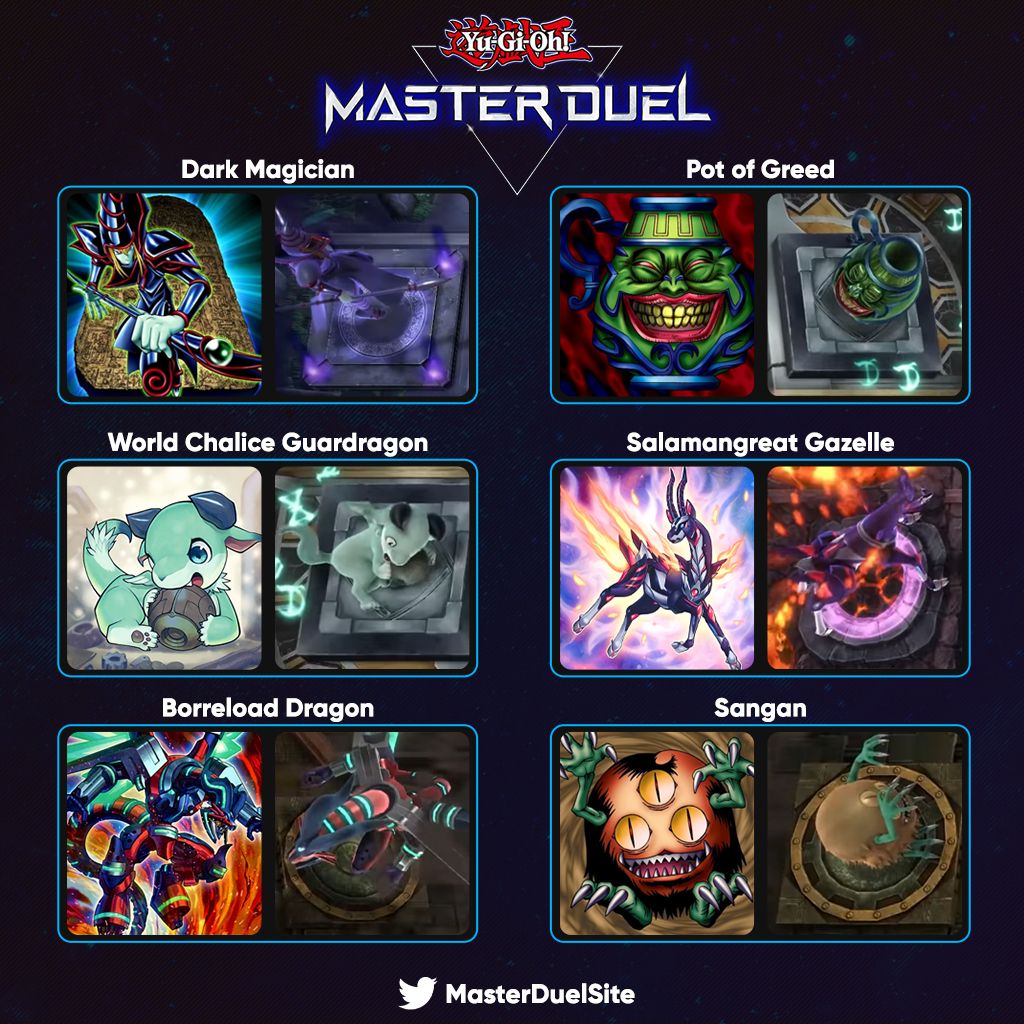 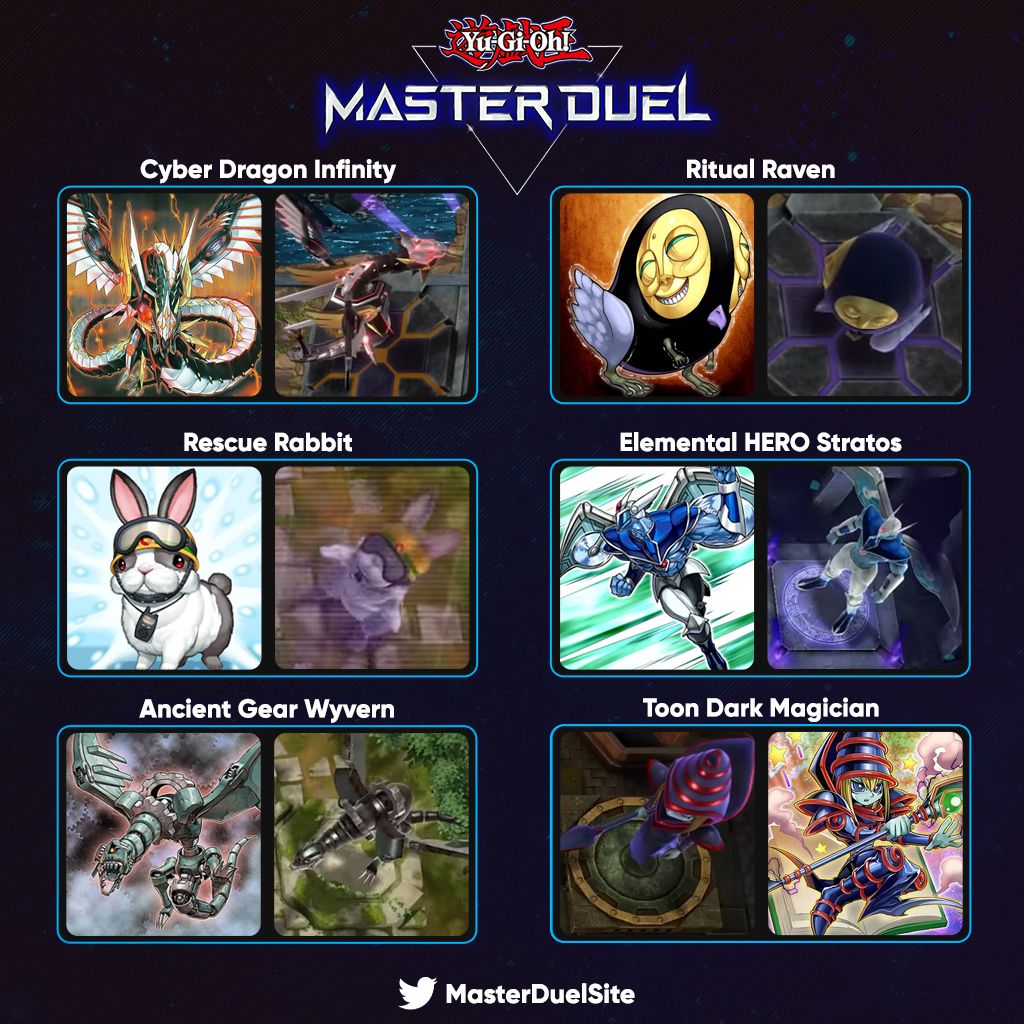 Monsters - Animations only play the first time that monster is summoned in the duel, and each animation has a unique visual flair corresponding to the monsters attribute. This also carries over to the effect used during the Battle Phase when monsters attack, which changes color and style depending on the attribute as seen in Yu-Gi-Oh! Rush Duel: Dawn of the Battle Royale!!. Of course not every monster in the game has an animation. You can find a full list of the ones revealed so far below: 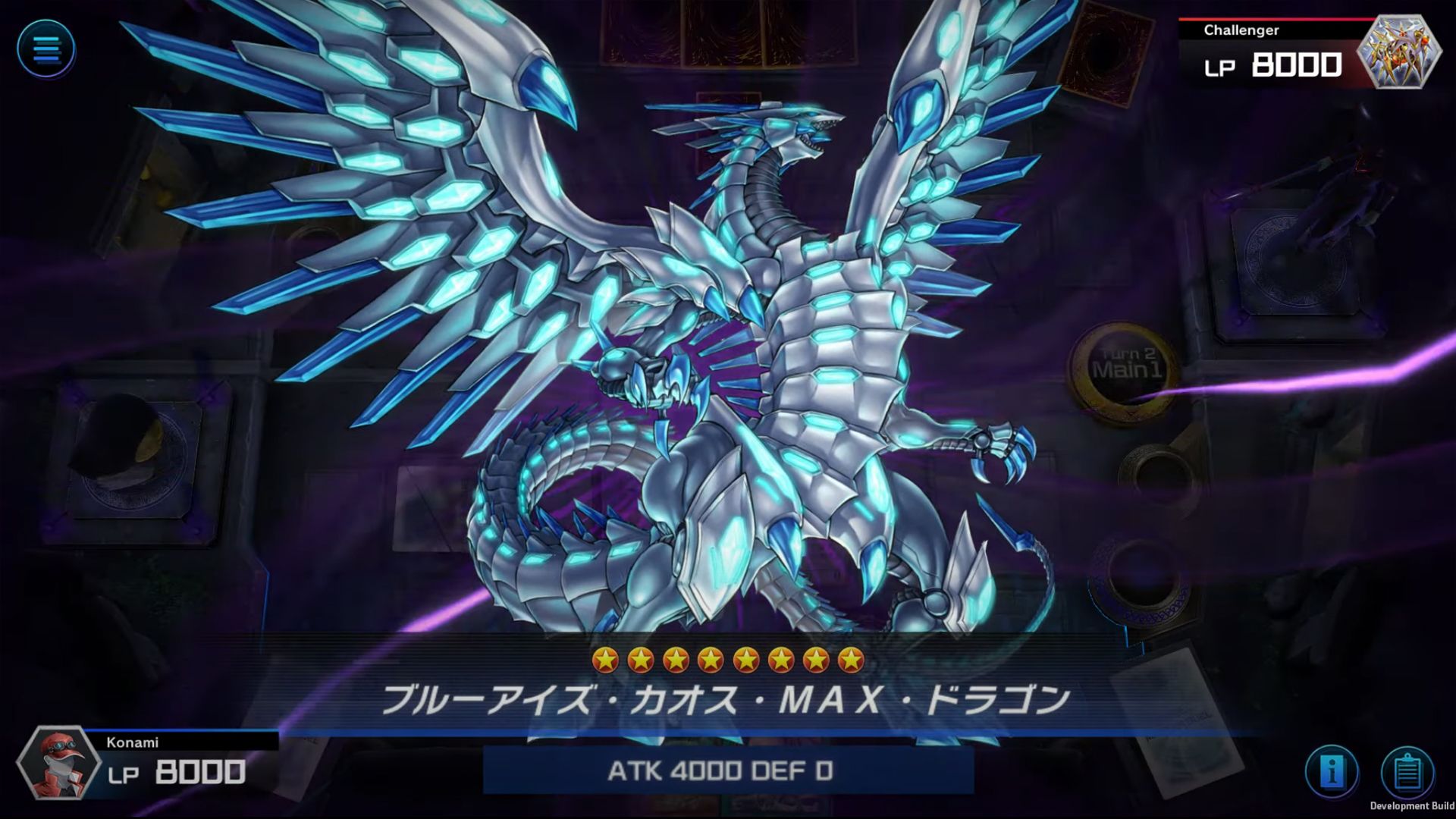 Spells & Traps - So far we have only seen two non-monster cards receive unique animations. Dark Hole's effect was shown off in the initial reveal trailer, whereas Monster Reborn displays a glowing Ankh, before returning the target monster back to the field in the OCG version of the game. 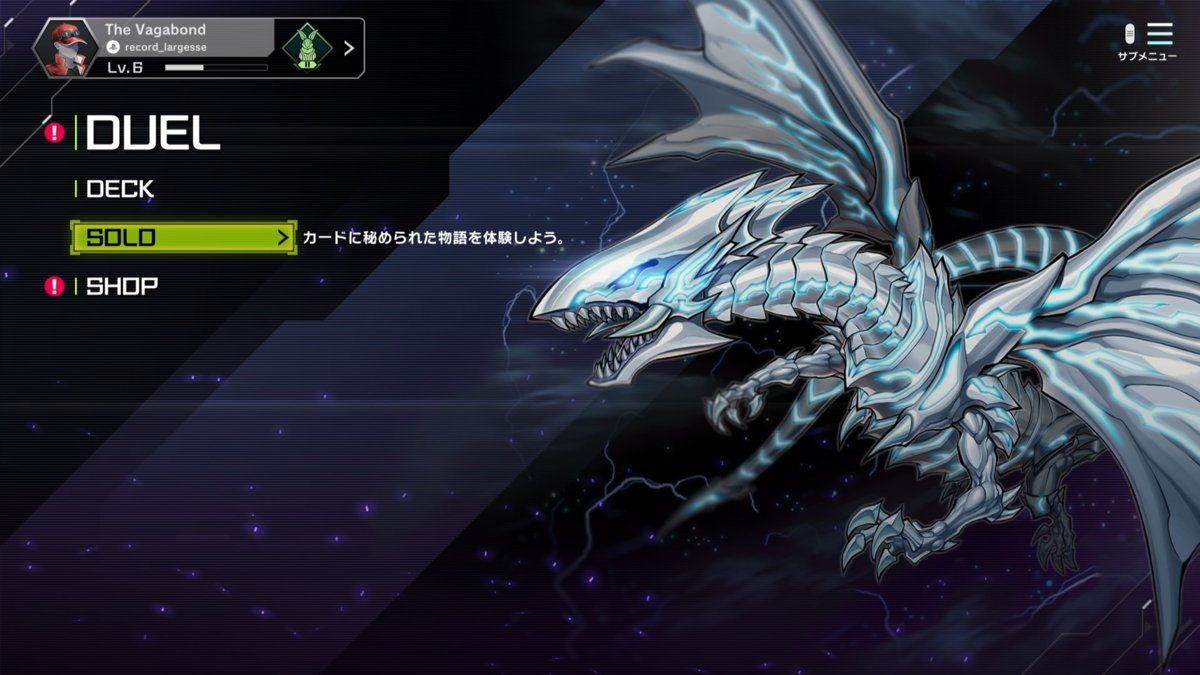 What we DON'T Know

There's still so much left to be answered - and hopefully not much time left till release. We'll keep this page updates as new information becomes available across the Jump Festa weekend.

Check out these video previews from VJUMP, as well as official Konami gameplay trailers and streams to see more of Yu-Gi-Oh! MASTER DUEL in action!